The Palace consists of six connected buildings, and is archetypical of the shoin-zukuri architectural style, which was perfected at the beginning of the Edo period (1603–1867). The Palace is designated as a National Treasure since it is the only surviving example of a fortified palace complex. The interiors of the Palace are magnificently decorated with wall paintings by the Kano School, intricately carved transoms between the rooms, and exquisite metalwork fittings, befitting the Kyoto residence of the Shogun. The floorboards of the Palace sound like the song of a nightingale when people walk down the corridor. This is caused by clamps moving against nails driven into the wooden beams supporting the floor. It is said, mistakenly, that this was intended to announce the presence of intruders. 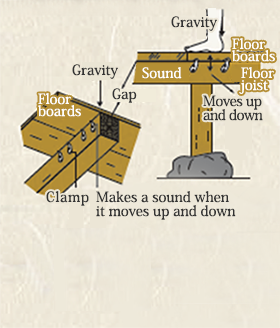 There are over 3,600 wall paintings inside the Palace, including many from the Kan’ei era (1624–1644). 1,016 of these paintings are designated as Important Cultural Properties. The Kan’ei era murals are by the young master painter Kano Tan’yu of the Kano School of painting, which enjoyed the patronage of the Tokugawa shoguns. They were painted when the castle was remodeled for the Imperial visit by Emperor Go-Mizuno-o in 1626.