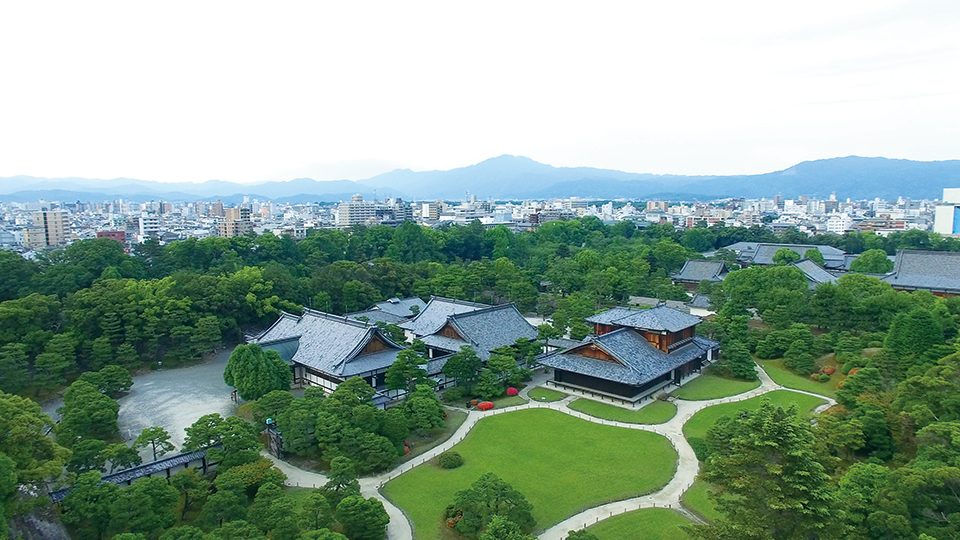 The Honmaru is the area within the inner moat in the center of the castle grounds. It resulted from the westward expansion of the castle grounds, ordered by the third Shogun Tokugawa Iemitsu in preparation for the 1626 imperial visit of Emperor Go-Mizuno-o. Iemitsu had a palace built here, which was lost to the Great Tenmei Fire of 1788. A new palace was built in its place by the fifteenth Shogun Yoshinobu (ruled 1866–67) toward the end of the Edo period, but was demolished in or around 1881.
The structure we see today was originally the Katsura-no-miya family residence, built in 1847 in the northern section of the Kyoto Imperial Palace, just inside the Imadegawa Gate. The main parts of this building, the Katsura-no-miya Palace, were moved to the present location in 1894 on the order of Emperor Meiji, whose villa Nijo-jo was located here at the time.

The Honmaru-goten Palace is one of the country’s very rare surviving examples of Edo-period domestic architecture designed for an imperial princely family. It offers a glimpse into the living quarters of such people, and for this reason has been designated as an Important Cultural Property by the Japanese government. After it was moved to Nijo-jo, the palace served an important role as an imperial villa, having accommodated Emperor Taisho (1879–26) nearly ten times when he was still a prince. The Honmaru-goten Palace is composed of a series of four buildings: Genkan; Goshoin; Otsune-goten; and Daidokoro and Kari-no-ma.

Paintings in the Honmaru-goten Palace

The walls and sliding screens inside the Honmaru-goten Palace are painted with motifs of seasonal flora, landscapes, and events. Most impressive of all is the Shokaku-zu (painting of pine trees and cranes) by Kano Eigaku, whose masterful execution—exquisitely detailed delineation of each and every feather of the birds, and a vivid palette against a powdered gold leaf background—complements the prestigious interior space of the palace. Many of the painters responsible were involved also in the decoration of the Kyoto Imperial Palace, and their high-caliber work stands as a rare testament to the splendor of imperial court culture during the closing years of the Edo period.

Conservation and restoration work on the Honmaru-goten Palace

Restoration work on the Honmaru-goten Palace commenced in 2017. It is being conducted to rectify the structural distortions suffered as a result of the 1995 Kobe earthquake, and ensure continued safe public access to this valuable cultural property by improving its earthquake resistance. Completion is scheduled for 2021, when the first floor of the palace is expected to be opened to the public year-round, and the convertible Noh stage in the Goshoin will be made available for cultural events.